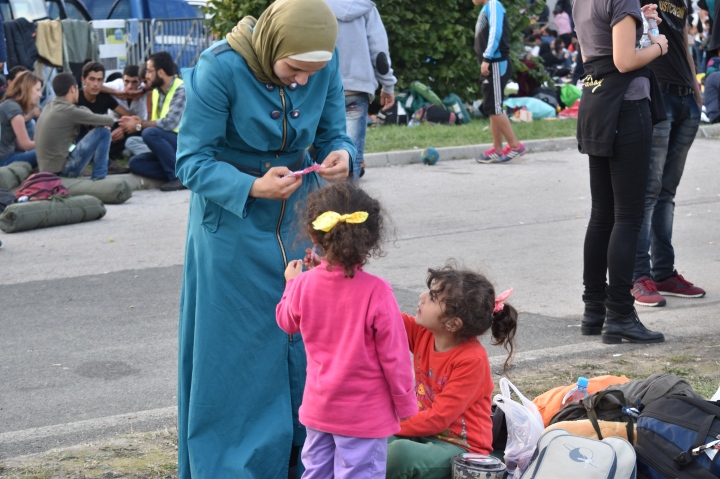 How do you find enough tents so that everybody sleeps relatively warm?

What do you do when it rains all day and there is absolutely nowhere to take shelter?

What do you do when your shoes are too small? Or your shirt is too thin?

What do you do when the 8 toilets for 2,000 people are so bad that they are beyond belief?

What do you do when your documents were washed away by the waves at sea or you didn’t have time to get a passport in the midst of the waves of war?

One of the unique elements of the entire situation has been its unpredictable nature.  According to crisis experts, generally a humanitarian crisis has a climax of disorganization following the initial shock. From there, order and systems can begin to be established by aid agencies and governments.

Because this crisis is characterized by a human movement that is literally responding as the situation  changes: there are frequent border crossings, multiple nations in play, politics that determine outcomes:  predicting patterns, stabilizing reactions, creating systems to deliver aid is incredibly challenging.

A case in point would be the Croatian response on the border with Serbia and Croatia late last week. They had a building prepared with 1,000 beds – they were ready before the wave of people migrated through the border town. The problem was that 5,000 people showed up instead of 1,000. Five-thousand tired and hungry people who had walked kilometers, who had spent two days at the Hungarian border where they had been water bombed and tear gassed and told that there was no hope for entry.

As the team in Croatia / Slovenia work with this current phase of the migration crisis, they are struggling with finding vehicles that can transport aid as well as encountering road and border closures. A big problem today is finding places to park, which sounds like an inconsequential problem, until you imagine vehicles full of aid. How do you get tents, blankets, heavy items to a makeshift tent city that is more than a kilometer up the road?

In a matter of hours, the flow of the refugees can change and a bottleneck can occur. When that happens, people face a night in the cold … babies, women, the elderly, children. As the temperatures now begin to drop, the situation begins to take on a sinister tone. Can they beat the weather … and what about those still en-route somewhere in Turkey or Serbia … How will they fare?

There is a strong fear factor amongst the people migrating because there is such a lack of information. If you can imagine having traveled for a month facing hunger, sleeping outside, walking kilometers, losing your documents, surviving a terrifying sea voyage, trusting your life and the lives of your children to smugglers. All the while, you have been virtually disconnected from news, email, information, and the voice of the ones that you love. Almost at the end of your journey, when you can see the last barrier before you, there is a line of policemen in riot gear. A bus comes. You have been at the border for nearly 24 hours. You are told to get on – no choice, no explanation, and no certainty where that bus is taking you: What country are you taking me to?  For what reason? For how long? What if my family is in Germany and the bus is taking me to Austria?

There are so very few solid answers. How many times have families looked at me and asked, ‘Should I allow them to take my fingerprint? Will we be able to stay in Germany? Where is the bus taking us? Is it safe? Should I try to sneak across instead? What country am I in now?

I have been asked for money … once.

I have been given so much and in return, when asked for advice, I am often left to say, “I am so sorry, but I do not know. I simply do not know.”

And, those questions cross over into the realm of people who are genuinely fearful of this tide of humanity. Is there a conspiracy? Is this dangerous? Will they integrate, assimilate into their new country?

So many questions. So few answers.

But, in the midst of all of these questions … won’t the best chance for peace come when we look at people as humans?

If we endeavor to develop relationships, to understand, to offer a love that is bigger than we are … would that be the right response of a people of peace?

6 thoughts on “Border Stories … the questions in a crisis”