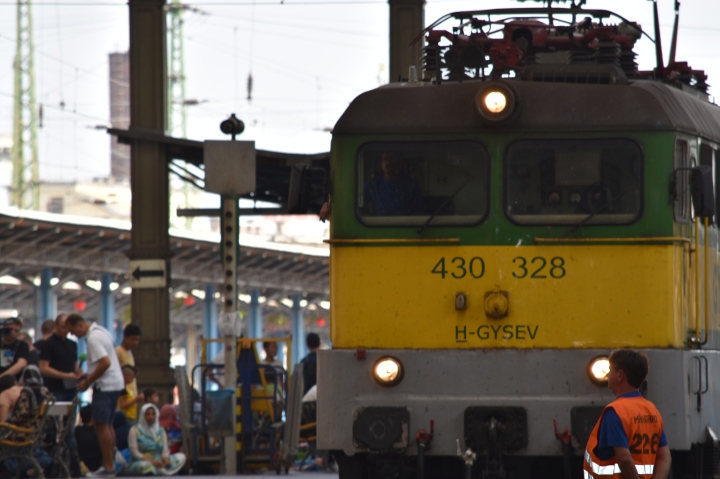 After the first interview, I realize that I need a newspaper. The train station conversations occur on the ground, at the edge of tents, beside bed-rolls, on small blankets. I need something to sit on while we talk. Yesterday’s French newspaper, Le Monde, catches my eye and I pay the Hungarian clerk for my makeshift seat. 3,200 pairs of feet that have travelled from Syria to Turkey to Greece to Macedonia to Serbia and into Hungary or journeyed from Afghanistan, or originated in Pakistan transform this floor into a storyboard for a generation. These are the pages of human suffering and the unbreakable hope of the human spirit. This story is told to us by feet. So many feet.

’We travelled from Damascus by boat with 50 people. The boat should only hold 25.’

‘We are newly married – just 21 days ago. She is 28, a teacher of physics. I am Muhammad, a mechanical engineer. We escaped from Syria because I should go into the military, but I have friends on both sides of the war. I don’t know who I am supposed to kill.’

‘My 3 children have not been in school for 4 years, since the war began. They asked me to take them away from our home in Elippo (Syria) so that they can go to school.

‘My husband has been missing for 2 years. I have 2 children. The airplanes bombed our house, so my father led our family out of Syria. But, we left my mother in Elippo. She has a heart problem and she cannot make this dangerous and long journey. I need a home for my children. I need a future.’

‘We have travelled for 45 days: 7 adults and 3 children. We paid a smuggler to take us part of the way. He took $1,200. We are here now. We used the last of our money to buy tickets to Germany. That was 5 days ago and we are still here, on this floor, waiting.’

Temporary toilets occupy an outdoor corner and water hoses twist and turn throughout Keleti station delivering necessary hydration in the Hungarian heat. No showers. No place to fix a meal. For many, no roof above their heads. And no electricity, which means a lack of contact with the outside world. This information vacuum creates a perfect pipeline for news to spread from one mat to the next, but where the truth lies is anyone’s guess.

‘Everybody comes and takes pictures, asks questions, writes stories, but there is no action. We are still here. We are here for 5 days now.’

At one mat, I am told that several men were taken away and beaten. At another mat, I hear that a train came today (Thursday morning) and people got on believing they were going to Austria. Instead, the train stopped at one of Hungary’s refugee camps and the people refused to get off. It led to a heated skirmish with authorities.

‘Why did Germany say that we could come and now that we have come, why don’t they accept us?’ Asks a father who was once an English teacher in Eleppo.

One crisis volunteer relays an incident the day before when several men were rounded up and taken away. The women, not understanding why their husbands, fathers, brothers suddenly disappeared with no explanation, became hysterical. ‘It wasn’t our proudest moment,’ he states.

In truth, CNN did report Thursday morning that migrants were being let into Keleti’s train stations in order to continue their journey to Austria. Upon hearing that news from CNN, I gathered up my bag and rushed to the scene anticipating trains and movement. I found things much the same as when I left the night before: thousands of people ironically waiting in transit to freedom.

Words to the World
Mid-day, I stayed for a while at a particular tent in the middle of the station. I had come to ask the family if I could interview them, promising not to photograph their faces. At first they refused, but then agreed. Taking Le Monde and placing it on the floor, I slipped my sandals from my tired feet and began to sit. ‘No. No. Please, sit here.’ There was a rush to produce a pink mat, “This is clean. You sit here.’ Hospitality from a family that has no home. In a train station of 3,200 stories, I found myself speechless.

As our conversation blossomed, my new friend, a Syrian refugee, a mother, a woman touched my arm, ‘Tell the world that in Syria, we are looking for a place where we won’t die.’

Indeed, it seems to me that all of us, regardless of where we come from or where we are going in this world would tell the same story. ‘We are looking for a place where we won’t die.’