Just as the  Starbucks fiasco about those blasted red mugs began to cool, Paris exploded. The Middle Eastern Refugee Crisis came barreling back. This post began as a satirical piece about the red mugs and the refugee crisis and radical Jesus, but with the division in our world right now, I did some editing.  The last thing we need is more cynicism and hate.

What follows are 3 points often given by those less eager to welcome refugees.

I respond with answers based in a core belief that the Christian God that we serve is missional (continuously in pursuit of his created ones), is grace-filled, is just (and that means actively in pursuit of justice for all of his creation), and chooses to redeem the world in synergy with (thru / by means of / together with) his people who are the body of Christ.

I fully acknowledge that from the world’s perspective, this God-activity is nonsensical, radical, recklessly passionate and often extravagant.

I also believe that the world is watching our Christian response and somewhere in every human heart there is a kernel of hope that this Jesus is really who he said he was.

I dislike the lines that we draw so easily with our speech: the believers and the non-believers, the refugees and the safe people, the Christians and the other faiths – as if somehow, we were not all made from the same lump of dirt-grey clay and redeemed by the same blood-stained Lord.

The Refugee Crisis Is A Plot

A mastermind is coordinating the movement of large numbers of non-Christian people into the West as part of a larger plan to transform Europe and North America.

I hope …  No. I believe – that this unprecedented movement of the Middle East into Europe is a God-plot. Nations where Jesus had to show up in dreams are suddenly present in places where his name is freely spoken. These are God-ordained windows, kairos moments,  where Jesus in the actions and the attitudes of Christ-followers everywhere can be clearly seen.

Nearly 1.5 million people from countries where owning a Bible is illegal or proclaiming Christ as Savior is punishable by death have suddenly shown up on christianized Europe’s doorstep. What an amazing chapter God is writing. Just as Europe and then North America began to see themselves as post-Christian, the Author of our salvation fans the waning embers of our faith.

It is a plot – an incredibly significant movement across Europe. Let us stop crediting dictators and politicians for the uprooting and transplantation of souls into the heart of our homelands. God should get all the glory for this story line.

If you do not like how he is sovereignly scripting the continuing tale of his good mercy, address your complaints to the Author. I strongly suggest that you read the story of Jonah first. (Bring something that provides shade and, dare I say, a red cup with beverage.)

With so many refugees flooding EU and American systems, household affluence will be affected, social systems compromised, education deteriorate, and crime increase.

This is possible although there are significant and reputable reports that make a case for positive outcomes for western economies and societies.

Let me be the unfortunate one to ask: Where did we ever get the idea that safe and affluent lives were God’s guarantee or even his plan for us? In fact, if we use the life of Jesus as a template, we should expect to know the instability of life as a refugee, homelessness, poverty, rejection, and death.

Affluence also has a down-side. It nurtures apathy and it has created rampant materialism and individualism with a by-product of loneliness and depression in many cultures. The western church has long struggled with a forgotten ability to live in community with one another – we split over generational music preferences.

In contrast, Middle-Eastern cultures are highly hospitable. Dare I say that they reflect a key component of the character of the God-head and Christ himself, which is radical hospitality?

This is not an either / or paradigm: as in, either affluence or community. The simple point: we have something valuable to learn from the infusion of highly hospitable societies. There is something of eternal wealth to be gained in the meshing of our lives with one another – across cultures, across skin color, even across religious identity. We are richer for our diversity.

Would we be a better reflection of the God we say we serve if we responded to the stranger with welcome? And, might it be possible that God himself has sent the stranger to your door? 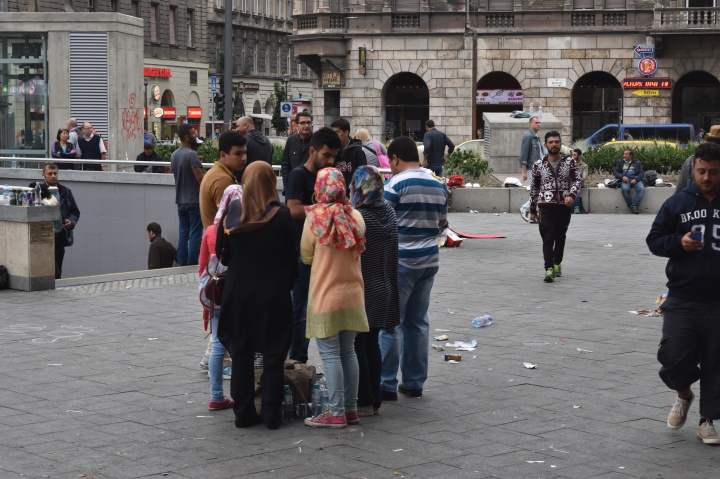 The Refugees Are Radical Extremists.

There are large numbers of young men who will fill Europe and the US from within and then attack – a Trojan Horse. Or, the demands for mosques and Shariah Law will transform towns into Arab communities. Either way, the West is lost.

It is undeniable that the pilgrimage of so many refugees from the East continues to permanently change the landscape of the West.

It is possible that extremist elements exist amidst the masses.

It is true that radical extremists have vowed to destroy what they see as the ‘infidel west’ and establish a Caliphate.

Their stated purpose is Armageddon.

Terrorism is now our reality. This is nothing new for Christianity, it is just new for western Christianity.

So, we would be wise to understand the full arsenal of weapons that come against us.

We spend a lot of time worrying about a number of extremists mixed into the general refugee population but we ignore a much more powerful threat.

When desperate people run from a radicalized war zone towards the ‘Christian’ west and they find christians unwelcoming, harsh, hateful, fearful, and suspicious, what happens? When they find barbed wire and fences? When they see self-preservation get in line before compassion? When they read Facebook posts? And, they do read English. What better means of radicalizing a population could there be?

To strip away the last hope that somewhere in the world, radically self-giving, recklessly passionate, and extravagant Love exists …

Perhaps that Trojan Horse is a little less obvious but so much more effective.

Can I be honest for a moment?

This post is not for the people applauding the 30 governors who closed 30 American doors.  These words will not change their minds.

This post is not for the politicians or the leaders of countries. Their ears will never hear my tiny chirp.

This post is to honor the journey of courage that so many have set upon – to honor their intense pursuit of hope and their determination that people are still good.

This post is for Jesus-believers of every color and language. Let us be the Church – known by our love.

This post is for those who do not believe in the Christ that I proclaim. There is room at our table – no coercion, no manipulation. We are many who would love to simply walk with you as friends – hear your story as our toddlers play together and our coffee grows cold.

This post is for my Lord because I believe that a radically self-giving, recklessly passionate, and extravagant Love exists … and his name is Jesus of Nazareth.

Thank you Jesus for giving this refugee a home.

48 thoughts on “Three Great Reasons To Reject Refugees (and Starbucks)”